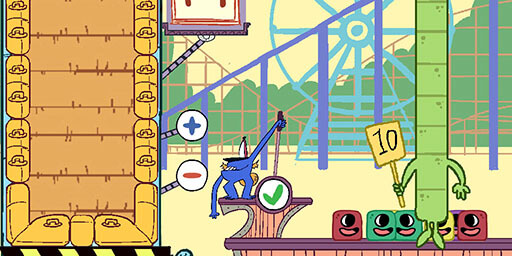 The Center on Teaching and Learning is a globally-recognized leader in solving problems in school systems. In 2014, they approached me (via my studio, Oreganik) about creating an iPad game that would teach common core math concepts in a "video game style," one that would tie into their back-end analytics engine. The overall goal was to put a powerful, engaging tool in the hands of teachers. Teachers could use the game to test concept knowledge and set a base score, teach the concepts through traditional means, and then have the kids play the game again to measure the delta.

Math Monster Carnival was a successful test of this paradigm, and was well-received by its target market: kindergarten and first graders. However, the grants that CTL landed to keep operations going forced them to pivot in a different direction, and future expansions were shelved.

As Project Director, I worked with CTL's professional academics to develop a robust approach towards the common core math concepts that would be suitably "fun." I found a wonderful artist named Brian Wolf, and together we shaped a "friendly monster" aesthetic with a whimsical palette. I worked with Michael Jones to design a soundscape that fit the venue, and with Will Bucknum to record a voice actress for all of the instructional VO. I handled the design and code as well.

It was a great project, and I'm grateful for the awesome people I got to work with.