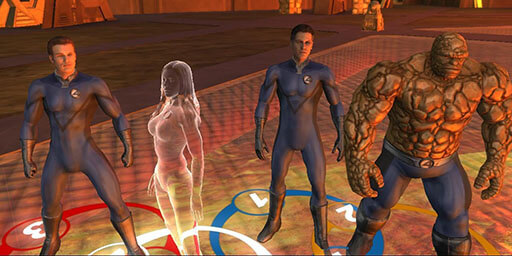 Rise of the Silver Surfer
The Fantastic Four must track down the mysterious cosmic messenger called the Silver Surfer, or the Earth is doomed! From deep volcano Krull bases to orbiting space stations full of bio-engineered ape warriors, up to four players can pack the screen full of Saturday morning cartoon action!

Visual Concepts had invested in an original engine and was staffing up for original IP development, using this game as the stepping stone to prove tech, process, and people. I was brought on board to help finish this project in time for the movie release. I ended up designing and implementing two of the six levels, including a number of in-game cinematics, and took over the implementation (and sometimes creation) of audio assets.

While the project was wrapping up, Take-Two's board of directors was replaced. For a publicly-traded company that was deep in the red, the choice to let go an entire team that wasn't on a project was an easy one. Thus, after the game shipped, everyone on the team was laid off. So my family packed up and headed to Oregon.